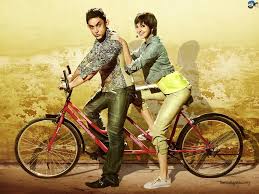 “Nanga Punga Dost” is a Hindi song from the 2014 film, “PK” yet to be released (19th December, 2014), starring actors Aamir Khan and Anushka Sharma. Composed by Shantanu Moitra, the song was sung by Shreya Ghosal, while lyrics were penned by Swanand Kirkire. The song, fourth from the soundtrack was uploaded on the networking site YouTube on 4 December, 2014.